Barb Jezioro coordinated our efforts for candidates for countywide offices in Erie and Niagara Counties and invited them to post their biographical statements and answer questions on Vote411.org for both the primary and general elections. Some responded, and voters have been able to compare candidates’ points of view.

On October 14, our League, in partnership with the Buffalo branch of the NAACP, the Buffalo Jewish Federation, Self Advocates of New York State (SANYS), and VOICE Buffalo, organized a webinar to explain four of the proposals on this year’s ballot. I also explained those proposals at a statewide meeting of SANYS the previous day. 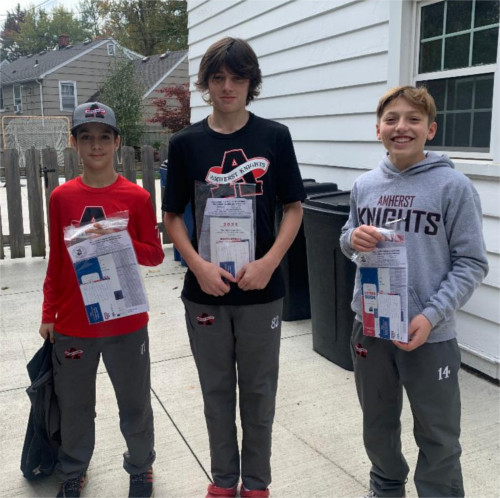 With the help of Tyrell Ford of PUSH Buffalo, we identified 371 registered voters in six low-turnout precincts in two low-turnout Common Council districts in Buffalo. We selected voters who had a 40%-60% “voter propensity,” likelihood to vote. We filled 400 large doorknob hangers with voting materials and handwritten postcards reminding recipients to vote on November 2. Volunteers wrote postcards, stuffed doorknob hangers, and distributed them in the six precincts. We have the names of these voters, and hope to research the results to see how many of those who received our information voted.

Volunteers who made it all happen